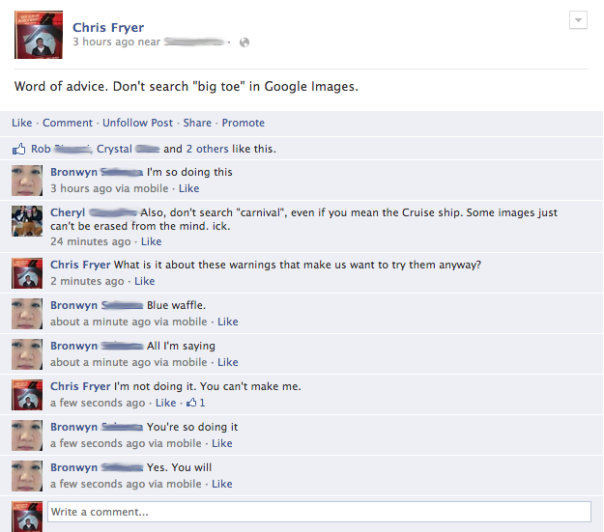 I’ll repeat the question: What is it about these warnings that make us want to do them?

What godawful curse of curiosity requires us to do the exact opposite of what someone explicitly told us not to do? It seems so wrong, doesn’t it? Here we get truthful, honest advice and we simply won’t take it. Sorry. You even know we won’t take it. Half the time we tell someone not to do something it’s because secretly we want them to do it. All of us fall for it. Before finishing this paragraph you probably already searched everything we suggested you don’t.

Regret it, don’t you?

Well, you’ll get over it. And you’ll do it again.

To be absolutely honest, I haven’t yet searched “blue waffle.” I’d rather just stick with my own imagination than get something even worse cemented into my brain. This time, I’m adhering to the advice. I won’t play those mind games anymore.

Update: Goddamn it. I looked.

Why? Why ignore the warning label? Why rebel so openly? What is it about human kind that seeks trouble? What gene within us begs us to pull fire alarms and run red lights? There have been proven, repeated, often negative outcomes from the very things that we are advised to avoid, yet we seek them anyway. Everyone wants to shoot a gun, even if we’re scared of them.

From the small, “Don’t run around the pool,” warning to the big, “Stop or I’ll shoot,” warning, we’ve got this collective desire to ignore negative commands. We don’t like being told what not to do. We hate it. All of us. Secretly or openly, we feel that the last thing we were born on this planet to do is take orders. No mattress has its tag left on it.

I will NOT wait thirty seconds before opening my steaming bag of microwave popcorn.

I will NOT come to a complete stop.

One random piece of advice I picked up in my lifetime was, in the case of trying to remember things, the trick is to frame it positively. Rather than saying, “Don’t forget to go to the store,” you should say, “Remember to go to the store.”

Hell, I’d probably still forget. No one tells ME what to remember!

I’m not saying that any of this is excusable. Rules are usually made for a reason, and when we run around breaking them, we know very well what we’re doing. It’s a cycle of self-destruction. We won’t break it until we actually listen to our own advice.

When the aliens come, perhaps not long from now if the Mayans have anything to say about it, these extraterrestrials will have no idea what to make of us. They’ll come in peace and we’ll give them war.